On Wednesday, kids across the country used their collective voices to call attention to a problem that we, as adults, have been unable to solve: school shootings.

Kids are scared. They are sad and they are angry.

Some adults derided the protest as a stunt, a means to escape conjugating verbs or solving for X.  For sure, some kids went along for the ride of a seventeen minute break from the argumentative essay.  But just talk to these kids. And listen. Most of them have done their homework. They will give you statistics about gun violence. They speak passionately about lives cut short and their own fears.

Others called the protest an inappropriate expression, suggesting that rather than walk out, they should “walk up,” that walking up would prevent the marginalized shooters from taking aim. The flaw in the “walk up” argument is it shifts blame to the kids–the victims– for violence. Do I think kids should be nicer to one another? Of course. Kindness, civility, humanity are lacking not just in schools, but in our social fabric.  But to tell kids that preventing the next school shooting is on them is just wrong.  The kids who turn guns on their peers and teachers suffer from complex disturbances that no sixteen year-old should feel responsible to settle.

From veterans returning from combat, we accept the long term effects of trauma. Kids who have survived a school shooting suffer similarly from PTSD.  Loud noises, unfamiliar faces, even the sulky kid in the back of the room all take on villainous significance. They wonder why they are alive but the kid who sat next to them in chemistry is dead.

And even kids whose schools have thus far been safe from gun violence are changed by what they have seen and heard.  Kids have been shaken. Adults mistakenly think kids believe themselves to be invulnerable, immortal. Talk to a few kids. You’ll see how far from the truth this stereotype is. There is a deep sorrow embedded in kids’ daily lives, a sadness they articulated in their protests.

Talk to kids. They will tell you the truth. They want us, the adults in the room, to do something. They don’t want this issue–an issue that affects them so personally– to continue to be buried in the political battleground that currently defines this country.

Wednesday’s walk out should have woken us up, should have expanded the conversation, should have moved us closer to action.  But in so many cases, grown ups have just expanded the abyss, deepening the divide as opposed to finding solutions that actually work. Everyone seems to want to hear himself talk when what we need to do is listen. 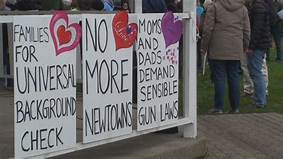