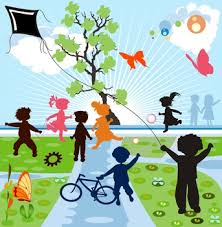 Last weekend, our son-in-law described how he and his friends once created a hybrid version of lacrosse. It was a contact, competitive sport,  part baseball, part golf, part dodgeball, with plenty of roughhousing.  Perfect for 8th grade boys.  The rules were negotiated and evolved with the game requiring no adult intervention.

But indulge me for a moment and imagine a world in which kids could just play.  It could happen.

But think about what kids could learn from a little spontaneous, unstructured play.  They would learn to advocate for themselves and to compromise.   OK, to the adult ear, this haggling sounds a lot like fighting, but assertiveness and flexibility are skills essential to success in the grown up world.  When adults always provide the last word in kids’ play, children learn to rely on an outside authority rather than practicing negotiating themselves.

Mostly, they can’t  just play anymore.  Kids are on teams : local teams and travel teams and Olympic development teams. Kids have personal trainers, too.  They attend camps devoted to drills and skills.  There are rosters and schedules and coaches all of which have their place,but too much of which also can stunt children’s ability to just play.

So many factors figure into this super structure of kids’ play.  The world is a decidedly scary place in 2012 which means kids just cannot be as independent as they have been in the past.  Play is no longer as simple as showing up at the playground with a ball and a bat. I get that.

But much of kids’ play has become adult obsession. We feel this need to dabble in every aspect of our kids’ existences, including play.  Some of us were fine athletes…back in the day.  But memory plays tricks on us and our mediocre performances on the playing fields of yore might seem more magnificent when colored with nostalgia. Or maybe we were never the stars we would have liked to be and our kids give us a second shot at playground immortality.

My son-in-law is right, though.  Unstructured play is a great gift.  Instead of working so hard to micro-manage what kids do in what little spare time they have, perhaps we should step back and let our kids just play.